Friends of the late Susan Madsen, killed May 8 at the age of 43 by a drunk driver in Draper, came together after her passing to find a way to honor their friend and her family.
MaryBeth Brooks Garrett serves as a spokesperson for the group “Friends of the Madsens.”
“She was taken so early from us. We weren’t ready to let her go; she was so neat, such a great lady,” Garrett said.
Garrett said Madsen had been involved in many facets of the community, including her children’s soccer and cheer teams, the PTA, Boy Scouts, her neighborhood and her church, among other organizations and that she was active in serving others.
The Friends of the Madsens gathered donations and set about to create a symbolic memorial in Susan Madsen’s honor. They chose to install a sandstone bench in Corner Canyon near the Creek View Trail bridge which is also near the Madsen family home. 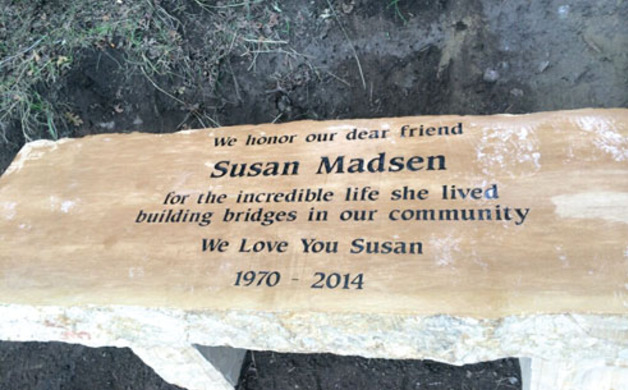 The group dedicated the bench Sept. 22, first by inviting the Madsen family to see the bench privately, then inviting the public to share in the memorial. Garrett said the group’s choice of a bench near the bridge was intentional.

“She was just one of those people. She really bridged all of us in the community,” Garrett said. “Susan was amazing and is sorely missed.”
Garrett added that it was Boy Scouts from Madsen’s troop who cleared and improved the area in preparation for the 1,000 pound bench to be installed.
“Susan gave so much to the community,” Mayor Troy Walker said in a press release following Madsen’s death.
Today, News